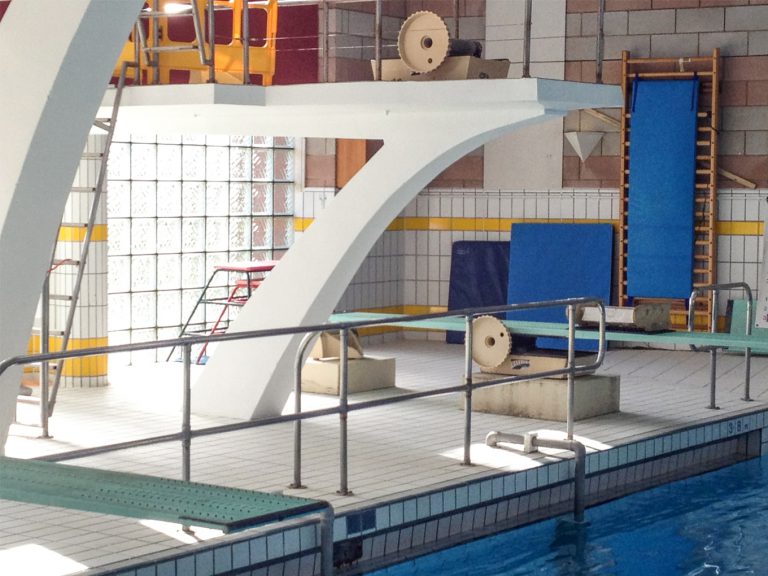 Having previously undertaken extensive repairs and coating to the Crystal Palace Olympic Diving Board for the 2012 London Olympic Games, Cemplas Waterprooﬁng and Concrete Repairs Ltd were the ideal contractor appointed to undertake remedial repairs and reinstate the diving board at the Hatﬁeld swim centre back to its former glory.

A detailed survey together with the removal of all defective concrete by Cemplas revealed very high levels of chloride contamination which had attacked the boards embedded steel reinforcement resulting in spalling of the concrete structure. A scaffold was erected to fully enclose the diving board, and a further survey was undertaken to identify the extent of concrete repairs required.

Once the defective concrete had been broken out, it became clear the main cause for the decay of the structure was due to the ﬁxing bolts of the diving board and safety handrail. To prevent the same problem happening again, the ﬁxing bolts of the diving board were removed and re-ﬁxed using a resin grout which would prevent water penetrating down through the bolts and into the structure. The handrail bolts which fell within the concrete repair areas were also removed and replaced with resin anchor ﬁxings. The remaining handrail bolts were checked to ensure they weren’t allowing water to pass through into the structure.

Following all remedial repairs the structure was prepared and repainted and the board remained closed until the repair mortars had reached their full curing strength, at which time Cemplas operatives returned to site to re-tighten all the handrail bolts before the board could be deemed fully safe and once more opened up to the paying public.

Upon completion of the works Chris Page (the coach of the diving club) who was also the only Great Britain judge judging the diving in the 2012 Olympics was delighted and highly impressed with the work undertaken by Cemplas.

Our focus at Cemplas is to exceed our client’s expectations and engender conﬁdence and respect for our people and our skills by acting honestly, fairly and truthfully.